Some discover their preferred method of exercise early on and have the self-discipline to stick with it for decades. The rest of us, well, we get a little bored. Among the many challenges brought on by the pandemic, some far more urgent than others is the inability to spice up our workout routines. Gyms and exercise studios are either closed or risky, and team sports are far from ideal. Zoom classes and YouTube classes are better than nothing, but the one-sidedness of the interaction makes it oh-so-easy to bring it at 50% — or less. Exercising outside is becoming less and less appealing as temperatures drop and the sun sets before you’ve had a chance to digest lunch. If you, too, are finding it hard to motivate these days, you might consider fitness video games. Even if you are not a gamer. Even if you never work out.

Fitness video games require you to use your whole body to engage with the game, instead of just your fingers. They’ve grown in sophistication and variety over the past decades, and are designed to give you an extra incentive to workout. Some do this by gamifying the session, and others by monitoring movement and tracking progress. Texting friends instead of doing another set of lunges? The game will know.

“Fitness games give us an immediate reward for doing something that pays off in the long term,” said Renee Gittins, executive director of the International Game Developers Association who has consulted on the development of fitness video games. “Unfortunately, humans are not good at processing long-term benefits, so that immediate positive feedback can be a great way to encourage habit creation.”

Important note: If you experience pain while performing any movements while playing a fitness video game, stop immediately. Check with your doctor before beginning any new exercise program.

There is something for almost everyone when it comes to fitness games. Some fitness games are like workout videos or personal trainer sessions, but with an extra interactive twist. Fitness Boxing on Nintendo Switch walks users through a customizable, and challenging, boxing workout. There are also Zumba games for a variety of systems, which make use of controllers or motion sensors to track movements and progress. 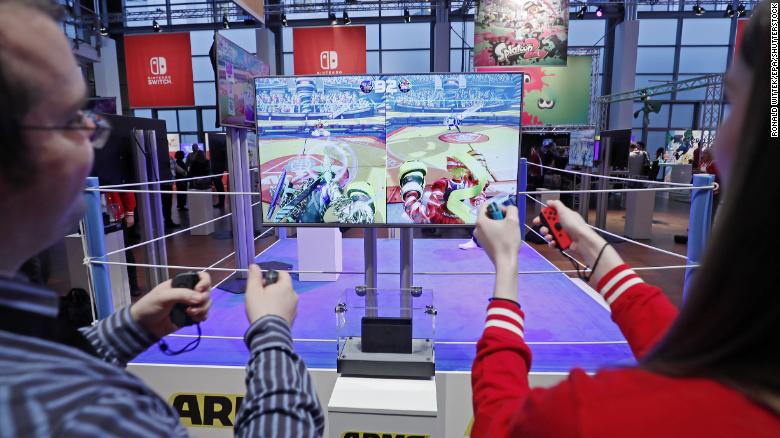 Visitors play Arms on the Nintendo Switch console during its German premiere in Offenbach, Germany, January 13, 2017. Other fitness video games offer a more fanciful backdrop for working out. Arms, which is available on Nintendo Switch, is a fighting game in which users choose between a variety of extendable, customizable arms and attempt to knock out opponents in different settings. Common Sense gives it the green light for kids 10 and up. Beat Saber, which is a virtual reality game available on PlayStation 4 and other devices, allows users to slice blocks representing musical beats in a neon universe. Ring Fit Adventure, a Nintendo Switch game that comes with a physical ring, is an action game, in which users roam around a large, virtual, and brightly colored world and defeat enemies. It offers one of the more challenging workouts. 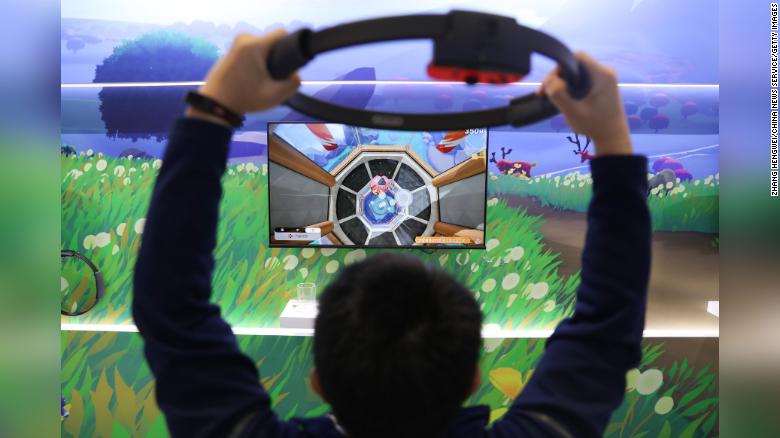 A visitor plays the Ring Fit Adventure game at the Nintendo booth during the Third China International Import Expo on November 6 in Shanghai. Dance Dance Revolution is one of the oldest fitness video games, dating back to the late 1990s, and requires a floor pad to track movement. The latest versions can be played on a PC; older ones are compatible with Xbox and PlayStation. Just Dance is a simpler, more kid-friendly dance game, Gittins said. Dance games are particularly good at getting heart rates up, which can benefit the body and mind. Those with a virtual reality system have a wide range of deeply realized fictional worlds to choose from like Sprint Vector, which mixes extreme sports with an intergalactic game show. Those with no systems can try out cell phone-friendly games like Pokémon Go and Harry Potter Wizards Unite, both of which require users to get moving outside and are also good for kids. 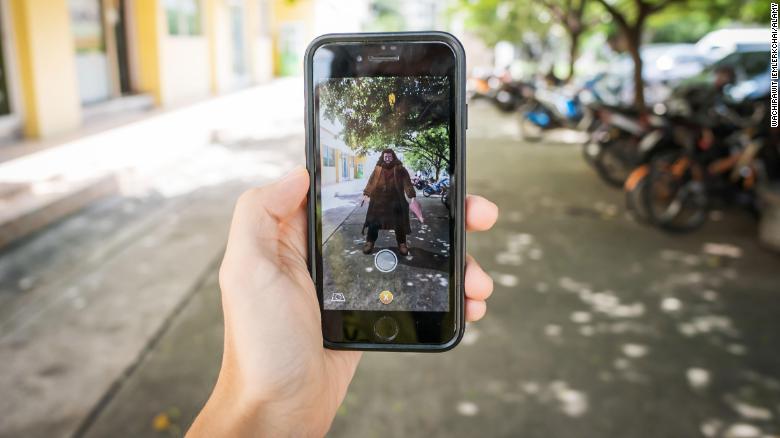 The Harry Potter Wizards Unite app can encourage kids and parents to get moving outdoors.

Hot tip: For those who have a system and would prefer to try a game before buying one, there is a decent chance your local library has one you could borrow.

For many, the ease of these home-based workouts is the big draw. Hweimi Tsou, a 31-year-old self-identified gamer and digital communications manager in the Bay Area, had never found herself in a workout groove before Fitness Boxing. She appreciates how easy fitness games are to integrate into her schedule, and that she can get a targeted, customized workout that taps into her sense of competition. She also finds it fun. 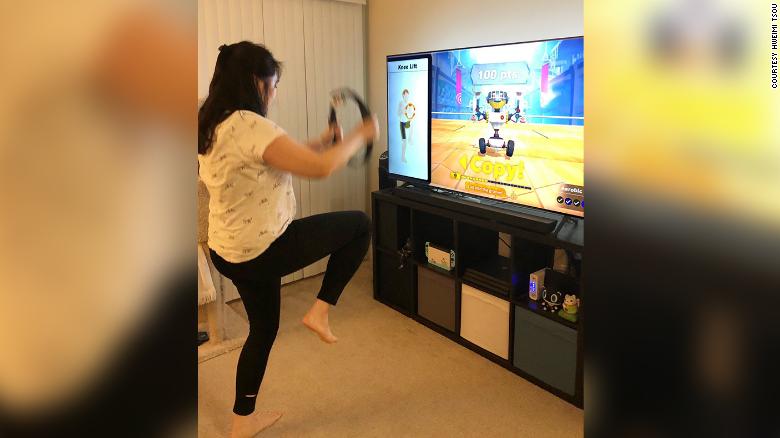 Bay Area resident Hweimi Tsou works out at home with Ring Fit Adventure on Nintendo Switch. Here she does knee lifts.”Right, when you start the game, it tells you how many calories you have burned this week,” Tsou said. “The game helps you find your sweet spot (in terms of exercise intensity), and then it keeps you going by pushing you to your limit.”Fitness video games are also appealing to those who don’t feel comfortable exercising in front of others. Duane Montague, a 51-year-old account director in Chino Hills, California, lost 65 pounds through the now-discontinued Xbox Fitness. It’s something the self-described creative type doesn’t think would have ever happened in the gym.” The idea of going to the gym, or running on a treadmill or lifting weights … that’s just not me,” said Montague. Through the videos and the sensors, he was able to slowly build up his strength and endurance, and make sure he was doing the movements correctly. Eventually, he built up his fitness confidence and did go to the gym; gaming became his supplemental workout.

Another perk of fitness gaming is that one can virtually compete or exercise alongside a friend or family member somewhere else as long as both parties have the game and an internet connection. Games like Just Dance, Arms, and Beat Saber all have multiplayer capabilities.

How fitness games are made

Making fitness games tends to be an elaborate process, involving a combination of game designers, sports scientists, and test audiences, and it can take years, Gittins said. Often, the goal is to make something that appeals to a wide audience, and not just the gaming crowd. “Game development is an extremely iterative process. It can be very hard to define fun,” she said. “They want to make you forget you are working out.” 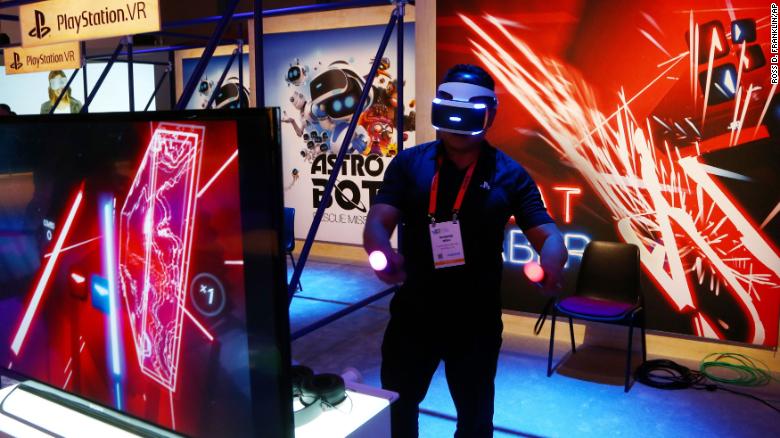 An attendee plays the PlayStation virtual reality Beat Saber game at the Consumer Electronics Show International, January 7, 2019, in Las Vegas. There are developers who emphasize the fun and fantasy side of the game, and others focus more on the exercise experience. Some do both.” Nintendo, for example, often works with fitness professionals to make sure they are encouraging proper movement and working for multiple muscle groups,” she said. As with all workouts, it’s a good idea to start slowly.

How to make the most of fitness games

Julien Tripette, a researcher in physical activity and sports science at the National Institutes of Biomedical Innovation, Health, and Nutrition in Japan, said users of these games should be aware of the games’ limitations should they become their primary source of exercise.

Tripette and his colleagues have researched the effectiveness of active video games and discovered that they don’t necessarily lead to a sustained improvement in fitness. “Laboratory studies on active video games are promising,” he said, explaining that some games require as much effort as their offline counterparts. “But real-life studies are more conflicted,” Tripette said. He said the problem is often that the games lose their appeal after some time and are not replaced with another form of exercise. Or they weren’t demanding enough in the first place. 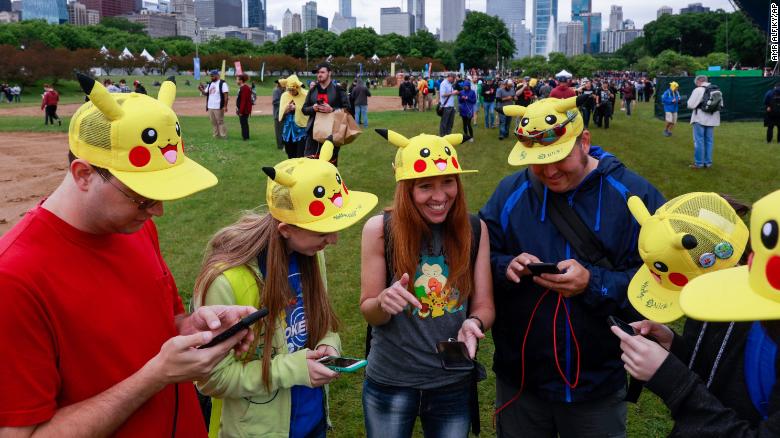 Tina Kellock (center) of Phoenix, participates with family and friends at the Pokémon Go Fest 2019 in Chicago’s Grant Park, June 13, 2019. There are active video games that are effective at toning muscles or improving balance, but they fail to get one’s heart rate up and therefore don’t improve cardiovascular health. Tripette said the research supports that active video games are better than nothing for most people — particularly those of us housebound during this pandemic winter — though are less of a sure thing with children. Playing active video games didn’t encourage more overall movement or increase fitness in children, according to a 2012 study. That said, this research took place long before advances in graphics, systems, and shelter-in-place conditions. Today’s children and their parents might see different results. Considering the high levels of cabin fever anticipated by so many people over the next few months, there has never been a better time to experiment with fitness video games. Like Montague, who eased into physical activity with the help of a video game, perhaps you too can use this as a jumping-off point for a more involved exercise routine. You might even want to invest in a simple heart rate tracker along with your new game.

Ensuring results can be as simple as asking yourself if you are breaking a sweat during the game. Is your heart beating faster (check that monitor!) and are you returning to the game on a regular basis? If the answer is yes to all of the above, these games might just be the virtual fitness shake-up the whole family needs to establish a fun — and pandemic-friendly — exercise habit.

Burger King is giving away free dollars to spend on its new $1 menu
What are the benefits of eating healthy?

Searching is in progress